Not only Rain Forest and Cartels

Colombia, has a name. Coffee and drugs are the first that cross our mind when the country is named. But is that so?. Did you know that from deserts to  snow mountains this country has all climates. That it has beaches in  two oceans?. That it´s diversity makes it a country with more species than many others, that its industry exports products produced with the highest quality competing with known brands. It´s people have been able to surpass crime and terror and continue to grow with hope in a peace sometimes crushed by unlawful guerilla and paramilitaries.

And development that gives infrastructure like the metro-cable to transport in urban areas where it would take hours to access by bus and the airport in Medellin with architecture not seen in many developed countries.

The bridges in Bogotá, even it has taken time to finish, you cannot recognize the city after having been away some years.

Not to mention the highways in the former Magadalena-medio, one could not even think in traveling in late eighties, and which will make the new commerce treaty with the US. a quick way to transport from the interior of this beautiful country with much to export to the ports in the Atlantic.

All this in a country with a PIB that has this growth as foreseen in the chart below. 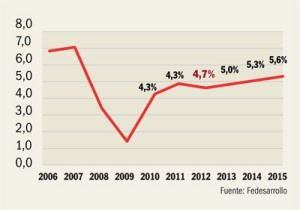 A different scene than the one you see in soap-operas trying to bring back figures like Escobar.

A past you cannot forget as the slogan for the “Patrón del Mal” as it is called and beating all TV ratings by using a post-holocaust known saying.

But we do live a new era. Thanks to not staying in the past. That is Colombia. Proud to be part of it!!.