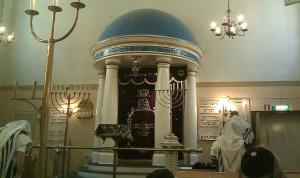 Again I am proud to work in this unique community, called Einheitsförsamling, which has no parallel, as the other many examples of how already mentioned in this blog we work shoulder to shoulder orthodox, reform and conservative jews. For example, today the 1st of Av, morning service at the traditional Adat Israel synagogue, where the town minjianim (quorum of ten adult Jews) gather during the summer. As a conservative Cantor I was asked for the first time in this synagogue to lead part of the service, it makes me very happy and honored to see I am accepted by my fellow orthodox jews who have other interpretations of how to practice judaism, not the case in other parts of the world. By going to an orthodox synagogue I show my respect to other points of view as well and likewise I see they do with me, I do not see any conflict in this. Kol Israel arevim zelaze , all Israel is reponsible for the other.

Later in the morning I got a call from Swedish Radio, I was asked to answer a few questions; I said I am not the spokesman of the community and that the first question was not a religious one, so I referred the reporter to the info dept. the question was; Do you feel you can practice Judaism freely in Sweden?. Not that I do not know the answer.

At one o’clock I went to pick up my wife in downtown Stockholm, and parked the car in a garage house because she was still busy arranging some things. I walked next to the Concert house a very central part of Stockholm were the Nobel prizes are given out. Suddenly I realized I had to be careful extremely careful, not only because the month of Av had begun were so many disasters have happened to our people, but because I had a T-shirt with the logo of our summer camp and a star of

David. I could be stabbed or as our rabbi last week approached by Muslim youths who started to yell at him that they would lynch him because being “a dirty Jew”.

Yes I did on purpose not answer the reporter although you can guess my answer.
I am proud to be a Jew, to belong to this community, but it has its sacrifices when it comes to go around in this city with the risks of showing my identity, glad I am I do not live in the south of the country were things are worse.
We are menaced and terrorized in Israel and Venezuela, and Europe is becoming as well a dangerous continent were hopefully governments will realize that the issue is growing and that these Jewish communities that want to stay and flourish in these wonderful societies need the support to not fear their future.
Have a good month, Chodesh Tov to all of you