After last weeks of living music in London at it’s best. My son invited me to St Martin in the Fields to listen to an Oratorio, Wigmore Hall for a Madrigal Ensemble’s concert, to the Royal Opera House to see la Boheme with top Tenor J. Calleja and soprano A. Netrebko. 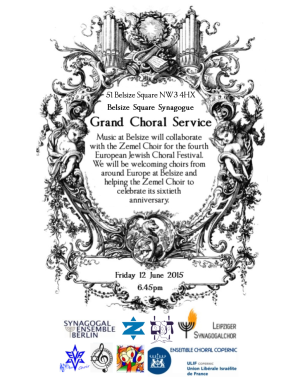 The week finished Friday night where I officiated with Belsize Square’s Professional Choir together with 150 choristers of six choirs assembled for the Fourth Jewish Choir Festival.   As Dr. Benjamin Wolf, the driving force behind the Festival, in his address Friday night said and repeated at the Gala Concert at West London Synagogue ” It is not only music that brings us together. Making bonds between the choir members and especially having a Kabbalat Shabbat 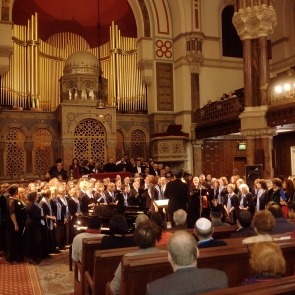 service at a Synagogue founded by Jewish German and Austrian refugees, with Choirs from Germany where not all members are Jewish, who are singing Jewish Liturgy, this marks a very special moment, and we envision how peace on earth can become a reality”. As I wrote back to Ben thanking him for the honour to have been part of one of the most memorable services in my 40 years as a Cantor and to share with my colleague Cantor Isaac Sheffer, of the Pestalozzistrasse Synagogue in Berlin, of the few Cantor’s left that keep the legacy of the original German liberale tradition singing with professional Choirs and organ. Music, to

embellish the service, to bring to the Synagogue what we also can hear in the most famous Music Halls while keeping our millennial  Jewish traditions, of which my son and myself will hear more about this week participating at the Academic Conference on Jewish Liturgical music.